This is Humberto Moreira, the former President of Mexico's Partido Revolucionario Institucional (PRI) and Governor of Coahuila from 2005-2011. He was arrested in Spain in 2016 and is currently out on bail awaiting trial for money laundering charges. During Moreira's term as governor, Coahuila suffered some of the worst violence attributed to Los Zetas in the years before a number of arrests and killings of high-ranking members effectively split the group into numerous smaller factions. Los Zetas began as a group of highly-trained former special forces soldiers who defected to work as enforcers for the Gulf Cartel (Cártel del Golfo, CDG). Coahuila abuts the Texas border from Hidalgo to Big Bend.

In 1985 during the Reagan Administration, the United States Geological Survey (USGS) published an assessment of the natural hydrocarbon resources in northeastern Mexico in the states of Coahuila, Nuevo Leon and Tamaulipas.

The survey concluded that, as had already been known and confirmed with productive wells in the area, "giant" natural gas, coal and potentially oil deposits were present primarily in the Burgos and Sabinas basins in northeastern Mexico.

Between 2003 and 2004, Pemex made several large discoveries of natural gas about 50-70 km north of Monclova, Coahuila. These findings attracted the interest of several international petroleum companies, including Repsol the Spanish-Argentine company and Petrobras, a Brazilian company.

The real story begins in 1946 immediately following World War II, when the top priority for U.S. foreign policy became the so-called containment of the Soviet Union. In 1946, the U.S. created a program known as the School of the Americas providing counterinsurgency training to Latin American security forces. The program was originally located in the Panama Canal Zone but later relocated to Ft. Benning, Georgia in 1984. In 1990 after the supposed end of the Cold War, the top priority for U.S. foreign policy became the War on Drugs, a period that lasted until 2001 when it shifted yet again to the War on Terror. In what's thought to have been sometime in the early 1990s, the U.S. hosted around 120 elite Mexican Grupo Aeromóvil de Fuerzas Especiales (GAFE) soldiers at the School of the Americas at Ft. Benning. Other sources claim it was at Ft. Hood in Texas. The identities of these soldiers has yet to be officially and publicly verified.

Sometime between approximately 1995 and 1997, 350 GAFE soldiers were ordered in to Tamaulipas to combat one of Mexico's oldest and most powerful regional criminal organizations, the CDG. The story goes that in 1999, Osiel Cárdenas Guillén enlisted the services of several GAFE soldiers to work as enforcers for the CDG. Cárdenas wanted highly-trained enforcers to help him maintain control over his organization and deter rivals. At least four of the original core member of Los Zetas are known to be former GAFE soldiers, including Arturo Gúzman Decena (AKA Z-1) and Heriberto Lazcano (AKA Z-3)

The period from 1999 to 2009 saw Los Zetas expand their numbers and territory to eventually dominate most of the eastern half of the country and even into Guatemala. The group's success is attributable to the innovative way in which Los Zetas operated as a decentralized criminal paramilitary force. Los Zetas were the first criminal organization in Mexico to standardize using advanced military tactics, techniques and procedures (e.g. weapons proficiency, small group tactics, communications, countersurveillance, psychological operations, and more) and other skills they had acquired from their formal training as GAFE soldiers, significantly raising the bar for what was required from rivals and security forces to effectively oppose them. Recruiting from military and special forces in particular became a standard practice for criminal organizations throughout Mexico as a result. Los Zetas were also innovative in diversifying their revenue sources into just about every legal and illicit business in Mexico, including mining, fuel theft, human trafficking, logging, extortion, piracy and more. Diversifying revenue sources enabled Los Zetas to take and control territory without relying on the drug trade for financial support.

President Felipe Calderón's decision to deploy the military in offensive operations against criminal organizations was at least partly in response to the advent of criminal paramilitaries in Mexico. Unsurprisingly, the militarization of the Drug War also correlated with an explosion of violence with the number of homicides skyrocketing. The violence in northeastern Mexico got even worse when in January of 2010, Los Zetas formally dissolved their alliance with the CDG following and the war between them began. 2010-2012 were the most violent years in Mexico's history up to that time, peaking in 2011. Some of the worst violence was in the northeastern states of Coahuila, Nuevo Leon and Tamaulipas.

There are too many atrocities to list them all here, but one of the worst happened in Allende, a small town southwest of Piedras Negras in Coahuila. According to the official account, the DEA shared intelligence with Mexican officials who subsequently leaked the information to Miguel Ángel Treviño Morales, AKA Z-40. Z-40 managed a drug smuggling network in Nuevo Laredo known as Nectar Lima (designating the letters N and L—as in Nuevo Laredo—in the phonetic alphabet used by the Mexican military). He was a notoriously brutal leader and members of his family and network still control most of the criminal activity in Nuevo Laredo but have since rebranded as Cártel del Noreste (CDN) sometime between 2013 and 2014.

The official story goes that the DEA received intelligence from an informant about the personal identification number for the phone Z-40 was using at the time. The DEA then passed the information along to their head office in Mexico City, who subsequently passed it along to Mexican law enforcement. The Mexican federal police who had problems with corruption then leaked the information to Z-40, and Z-40 subsequently went after the family and neighbors of the informant and his crew in Allende and the surrounding area. The Zetas bulldozed houses and an unknown exact number of people disappeared, or so the story goes.

In all, around 300 people are thought to have been murdered over the course of at least two months, their bodies incinerated and destroyed in barrels filled with diesel fuel, and their houses looted and demolished. Dozens of calls to emergency services went unanswered, firefighters arrived but were supposedly turned away by Los Zetas. The official story is that the security forces in the area were complicit, and the corruption in Mexico and impunity of the criminal organizations was perfectly illustrated by this example. The truth is we'll probably never know for certain what exactly happened. From 2009-2013, very little information even made its way out to the rest of the world. Chihuahua, Coahuila, Nuevo León and Tamaulipas, where some of the worst violence of those years occurred, were virtual dead zones. A code of silence was brutally enforced. In 2010 after the murder of the journalist Valentin Valdes, the third in northern Mexico in less than 3 weeks, the editor of the Coahuilan newspaper Zocalo announced it would no longer cover narco violence.

The massacre in Allende was the worst mass killing in Mexico, but almost a decade later, there are still more questions than there are answers. For instance, why did the state government of Humberto Moreira not begin searching for the remains of the victims until 2014 almost three years later? And how had the state not intervened in violence which unfolded over the course of at least two months with a military base nearby? According to the official account, the massacre in Allende had been retribution against informants Hector Moreno and Jose Luis Gaytan Garza. However, according to testimony from Moreno, he claimed to have fled the area after the killings began in Allende and the surrounding areas and made no mention of any members of his family being among the victims of the supposed retribution.

In 2009, under the orders of Governor Humberto Moreira, several special security forces were created in Coahuila, including Grupo de Armas y Tactical Especiales (GATE) and Grupo de Reacción Operativa Metropolitana (GROM). Some of the worst human rights abuses documented have been attributed to these and other security forces within the state.

From 2009 until 2014, thousands are thought to have disappeared in Coahuila (some estimates include up to 8000 people). Many were detained by GATE forces in front of their families never to be seen again. At least 49 cases of disappearances by GATE have been documented. These are only the few families brave enough to speak out.

But the distinction between criminal organization and state was anything but clear in Coahuila during the Los Zetas years. According to reports and testimony from a high-ranking member of Los Zetas, there was direct collusion with the government and police of Humberto Moreira. The testimony described how Los Zetas had conspired directly with the governor, other politicians, police, ranchers and businessmen. In exchange for U.S. $2 million/month, governor Moreira permitted Los Zetas to operate with impunity.

According to testimony, "[t]he arrangement was: we protected them and we murdered, kidnapped, stole and extorted people they singled out. In exchange, we had the freedom to carry on with our activities throughout the state.” Los Zetas in Coahuila acted as an extension of the State, carrying out targeted attacks on behalf of Moreira and his associates. Which brings us back to the Allende massacre. This supposed retaliation against an informant was unlike anything seen before or since. Between March and April of 2011, Los Zetas with the complicity of the state and federal government unleashed terror and destruction throughout Northern Coahuila in Allende and the surrounding areas. They killed entire families, demolished homes and displaced hundreds of people from where they had been living. In effect, they cleared the land.

That land happens to be worth millions to the landowners and billions to the companies with the capability of extracting the natural gas, coal and oil found in the deposits on those landowners' properties.

Calderón's militarized Drug War and the so-called Kingpin Strategy of targeting the leadership of criminal organizations have produced a landscape in which hundreds of smaller factions now fight the state and each other for control over territory throughout Mexico with new record levels of violence every year and no end in sight.

The violence and insecurity caused by the militarized Drug War have been devastating for Mexico. For the defense and security industries, arms manufacturers, transnational energy companies and others, it's been a windfall.

For more on this subject please see the following: 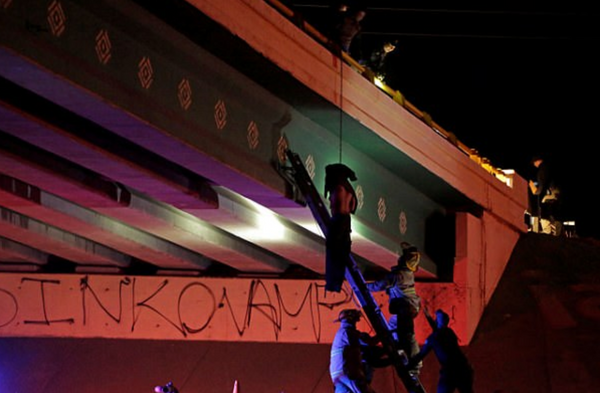 The more attention that horrific displays of violence by criminal groups receive from the media, the more likely it is that there will be additional displays of brutality 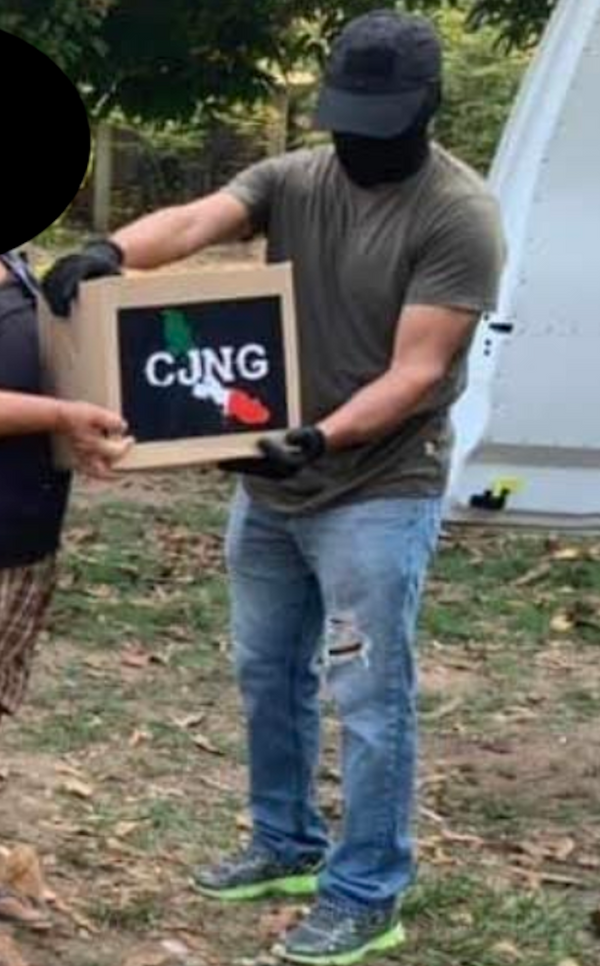